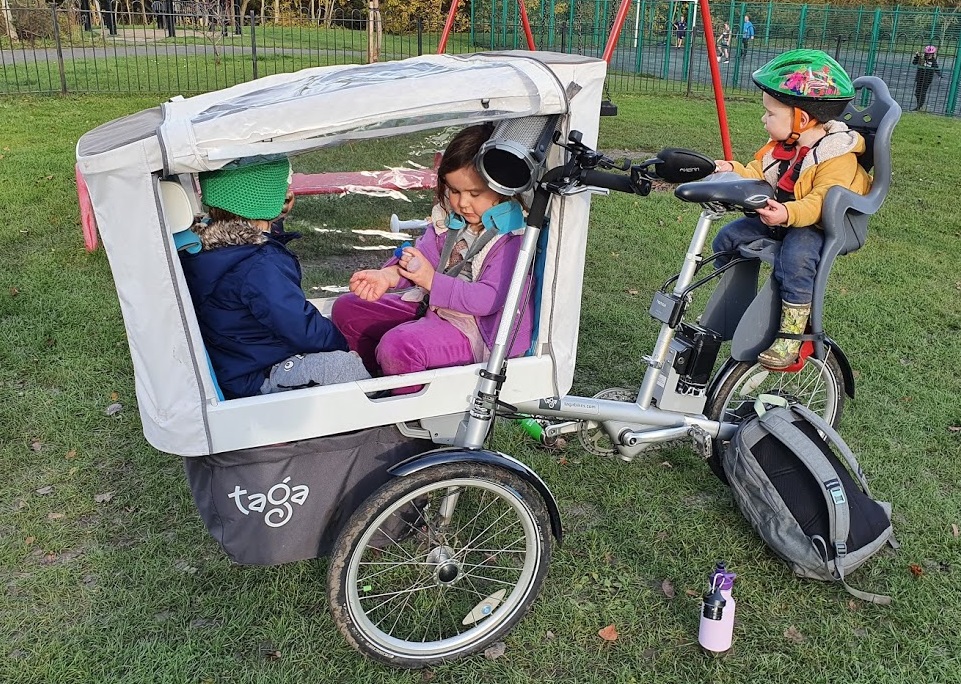 My quest for car-free local travel with small kids

There are enough blogs out there telling people to get out of their cars and jump on a bike or walk, and while this is great advice and will work for some, it is a little too generic to work for everyone.

We are a family of four with two small kids (aged 2 and 4) so cycling is off the table if we are all going together – the kids can’t yet ride and 4 is too old for the classic “seat of the back of Dads bike” we used to use when she was younger. Walking is possible for short distances only, like to the end of the road, but if you want to go anywhere further and want to walk we are left with the pushchair with a buggy board on the back – a far from perfect solution as our 4 year old only agrees to the buggy board after 30+ mins of slowly dawdling along then complaining her legs hurt and when you finally get her on it, the thing is too close to the pushchair resulting in her leaning back while on it – fine for her, not so fine for me. I have not got stretch Armstrong length arms so the result is walking like a hunchback with my arms outstretched as far as possible around my now rather grizzly daughter (P.S. don’t call them grizzly at this stage – while it’s true, it won’t aid your cause).

We are left with busses which end up costing more than the car and are less convenient than walking or cycling (if they were only an option).

Lockdown 1 earlier this year meant that we were spending a lot more time out and about in the many parks surrounding Aylesbury – we are lucky to have so many. Being home more I put a little more thought into solutions and initially came up with the below contraption which is basically my bike with a child seat on the front and a “Trail Gator” tow pole attached to my daughter’s bike to pull her along.

The first incarnation of this had the classic “baby seat behind you” Hamax seat but my son could never keep still on it and because of the way those seats attach to the bike frame, his fidgeting translated into my bike being pulled in all directions and upsetting my balance so we quickly swapped it out for the frame-mounted seat you see above.

This setup was brilliant! We could get around town no problem at all. Cheaper and more environmentally friendly than the bus and in some cases quicker than the car by the time you factor in traffic and walking from car parks to where you are actually going.

There was just one (major) snag – endlessly ruining stabilizers on my daughter’s bike – they are simply not meant for the speed or distances we were traveling (or curbs in any shape/size).

Towards the end of lockdown 1, I was looking at getting a pull-along trailer but these have had limited use only due to their max weight capacity – the “standard Halfords” pull along trailer has a capacity of 25kg – my two children would have been over the weight limit – there are models with higher weight capacities (the Burley D’lite has a 45kg limit and was able to handle the greatest weight in my research) but this still gives you a limited lifespan – I might have got 2 summers out of the Burley but no more.

My search leads me to Cargo bikes, designed to carry larger weight than a pull-along trailer and because they are designed as a holistic item rather than as a bolt-on thing. They carry the weight much more easily meaning I could go further/feel less dead on arrival. Before I go any further I should say they are VERY expensive so even this solution won’t be for everyone – second-hand cargo bikes start at £800 and a half-decent new one will cost you £3000+ but because they are pretty uncommon they keep their value well if they are looked after.

In my cargo bike research the first thing to decide on was electric or non electric – pulling the kids around on my trail gator solution was a good workout and wasnt likely to be sustainable as the kids got older so electric is the logical choice, but this adds ~£1000 to the price.

My usual starting point when looking to buy almost anything is to have a quick look on Facebook market place (second hand is more sustainable and a whole lot cheaper) and I was in luck – I found a Bellabike 4 for £400 in Oxford, this is what it should have looked like

I have no pictures of the actual article but it was completely ruined – the box the kids sit in was rotten through and there were multiple mechanical issues that would have needed specialist parts direct from the manufacturer to fix (EG a cable operated drum brake for the two main wheels). I should have known it was too good to be true. Giving it a test drive was enough to convince me to fork out the extra for an electric variant though so the trip hadn’t been a complete waste of time. I spent a lot of time looking at the Babboe Big-E and Curve-E which looked great but where too new to find second hand (and are hideously expensive new – £2899 for the Curve and £2399 for the Big-E) but ended up settling for a Taga 2.0 electric which looks like this (my actual bike).

Why? I could find it second hand for a reasonable price at the time at £1700 with a whole bunch of accessories, which is still a lot of money, but as the initial depreciation hit had already been swallowed by the first owner, as long as I look after it we should make most of that back when it is time to sell (new they are more like £2800). Also unlike the Babboe options, the Taga is constructed so that it can be folded up for storage or to fit on a car bike rack. My initial thinking was we might fold it up over winter, but what has ended up happening is we have used it throughout winter as well.

It has plenty of room for 2 kids inside and because it is a tricycle essentially there are no balance issues with adding a third seat at the rear (which has been used a few times when we gave a lift to a friend’s son who wanted to see what it was like).

I take the kids off to one park or another still using the Taga most weekends and sometimes during the week too (yes, even in the dead of winter – we are still in lockdown so life is a lot more outdoors than in previous years), and have clocked up hundreds of miles doing so. It is also frequently used for the weekly shop and odd trips to DIY shops when something needs doing on the house

I have a crate of beer under one of the seats and a very full Aldi bag in between the seats in this pic, and if I had remembered before setting out, the seats are easily removable giving the basket enough space for 3 Aldi bags.

There was a period of 2 weeks when I was taking my daughter to and from school in it every day too which is 3.5 miles each way (central Aylesbury to Weston Turville, meaning most of this trip was up and down the A413) when we had no car. The bike was more than up to it and was not overly hard work, the issues with doing this more regularly are time and weather. It would take almost an hour to drop my daughter off and come back home again which wasnt practicle with my regular work meetings at the time but also when its horrizontal rain, while my daugher was perfectly happy and dry under the rain cover, the poor engine (IE me, dad) was less dry and happy!

I thoroughly recommend a cargo bike to anyone interested in sustainable local travel. It is quicker to get around most places locally as you can park directly outside where you want to do rather than drive to a car park and walk the last bit, and most certainly cheaper on a day to day basis as there is no fuel and no car parking to pay.

If anyone out there is reading this and thinking about getting a cargo bike to travel Aylesbury in and has any questions, mail me on hello@sustainableaylesbury.org.uk or tweet us – I will happily answer any questions you may have on cargo bike life.

This site uses Akismet to reduce spam. Learn how your comment data is processed.